"In their pure existence, angels are of a divine essence of light and sound."

Angels, a.k.a. Seraphim,[1] or Seraphs,[2] are spirits of light and sound who are the denizens of the High Heavens. Dedicated to the ideals of order, they are the opposite of demons, and have fought against them since the dawn of Creation.

"Like musical notes in a grand chorus, angels are the manifestation of the Arch’s intrinsic harmony."

Angels are birthed from the Crystal Arch, though only during moments of perfect harmony in Heaven[3] through a process called the Lightsong. The amount of angels the Lightsong can give birth to is finite—it is a case of them embodying a set amount of Anu's power. If an angel is killed, a replacement angel will be created by the Arch, but such an angel is still a different individual from the one (s)he is replacing.[4] Tyrael is the only known example of an angel reforming as the same individual, said reformation occurring after his destruction at Mount Arreat.[4] The replacement angel is not born instantaneously.[5]

While able to be killed,[4] angels are immortal beings and are not made of flesh and blood. Rather, angels are living manifestations of light and sound, and soar on wings of light itself.[3] The wings radiate energy, and under normal circumstances, any human weapon that strikes them will turn to ash.[4]

Angels possess great strength far above that of a human, but some angels are stronger than others depending on their significance, their rank in the celestial chain of command, or simply their nature as an angel. An angel can willingly forsake their immortality and become mortal, and even retain their angelic powers, but such an act does not give an angel access to humanity's latent nephalem abilities as their souls remain purely angelic, free of demonic ancestry.[6] Tyrael is the first (and currently, only) angel to have ever undertaken this transformation. The removal of his wings was a vital part of the process, but not the catalyst for it—the removal of an angel's wings does not make that angel mortal by default.[5]

When wounded, a substance akin to 'liquid light' has been observed to spill from an angel's wound(s).[7][8] This substance is not blood.[9] Angels do not require sleep or food,[10] and instead draw their lifeforce from the Crystal Arch.[11] If this connection is severed/corrupted, angels can be incapacitated and rendered unconscious.[12] Angels possess a sense of smell, and their eyesight is superior to humans in most regards.[4] As with mortals and demons, angels carry Essence within themselves.[13]

Angels are able to disguise themselves as humans and walk among them.[14][15] In their natural forms, however, angels appear to be faceless, almost always covered by a hood, though their heads are humanoid in shape.[16][17] Angels have glowing skin and their eyes have eyelids (at least, this was true for Inarius).[1] Emotion is sensed from angels by the movement of their wings, which appear as streams of light.[18] These streams can be used individually like tendrils, used to "walk", hold objects and even to bind an angel's foes.[19]

Angels can wield powerful magic.[20] Before the destruction of the Worldstone, like demons, angels had great difficulty in manifesting on Sanctuary. Even Tyrael could only manifest for a night at a time.[21]

Angels are capable of interbreeding with both demons and nephalem. Indeed, it was such an act that led to the creation of humanity in the first place.[3] They fear humanity for its ability to choose between good and evil, a fear intensified in recent times because of the Nephalem and their bonding with Death.[22]

An angel's wings flutter when they are happy.[23] Most angels' wings are blue-white in color, though Angiris Council members have demonstrated other colors such as orange (Imperius) and purple (Malthael).[24] Angels forgotten in Pandemonium have black wings, and Reapers' wings are skeletal and gray in appearance.[11] Red is also another possible color.[25]

"Hell hath no limitations. Your inflexibility is why you fail, angel."

Angels are ruled over by the Angiris Council. While the council has lost members over time, and have had these members change aspects, the council, in essence, represents the virtues of Anu, the Creator. These virtues are valor, hope, fate, wisdom, and justice, and at least initially, were represented by the archangels Imperius, Auriel, Itherael, Malthael, and Tyrael respectively.[3] Each angel that is created through the Lightsong is assigned to one of the domains/angelic groups of Heaven that represent one of these five aspects.[4]

Unlike demons, who war among themselves, angels seek to exist in harmony among their own kind.[3] In battle, angels adhere to strict militaristic principles, and believe that only strict discipline can properly restore order to the myriad realms.[20] Angels, and their ideals, can basically be thought of as 'good,' though angels can still take these concepts too far, as demonstrated in the Sin War,[9] and in its aftermath where, with the Great Conflict having reached stalemate, such dedication to order led to stagnation in Heaven.[3] Nor are angels above vice or corruption by the lords of Hell.[3] In the eyes of some, angels are, in their own way, no better than demons.[15][26] While angels naturally gravitate towards unification, their rigid ideals do not allow them to adapt to changing circumstances easily.[27] The existence of humanity is one such example, and angels have displayed different reactions to their existence, even going so far as to advocate their eradication (e.g. Imperius) while others have even turned on their own brethren on humanity's behalf (e.g. Tyrael).[4] Many among humanity give reverence to angels, seeing them as shining paragons of heroism, but this is a half-truth. Angels exist for the sake of bringing order to Creation, while humanity, in contrast, is a source of disorder. As demons are true to their nature, so are angels, making order out of chaos because they know no other path.[28] For angels, only absolute order can govern Creation.[29]

Angels are generally not curious, as they believe everything there is to know is written in the Scroll of Fate.[30]

Each angel wears armor of some kind, though it is said that this is more for reasons of ornamentation and to provide a sense of individuality than to provide protection.[3] The armor worn by archangels is a manifestation of their spirit.[31] Some angels are considered brothers to each other, despite not sharing blood as humans may.[9]

Few angels have ever willingly abandoned Heaven, and those who do so are stigmatized by their own kind.[32]

Eventually Heaven and Hell will come to take notice upon Sanctuary, the world Inarius and Lilith created with the Worldstone. The world was populated by humanity, stemming from a coupling of angel and demons. The Heavenly Host was dispatched to 'cleanse' the world, resulting in a three-way battle between Heaven, Hell, and the Edyrem. It ended with Uldyssian's sacrifice, which swayed the views of Auriel, Itherael, and Tyrael, voting to spare Sanctuary from destruction and making a pact with Hell that it be left be.[3]

With the pact between Heaven and Hell at the end of the Sin War, the Eternal Conflict ground to a halt.[3] This was broken when Diablo, now a singular Prime Evil, led the combined might of Hell against the Silver City.[18] The Diamond Gates were shattered, Imperius wounded, Auriel captured, and for the first time in history, demons ravaged the city's interior. With Auriel's capture, the angels began giving into despair, but after her rescue by the Nephalem, hope returned, and the angels began fighting back with more fervor. While the city was ravaged and the Crystal Arch nearly corrupted, Diablo was nonetheless defeated.[33][34]

Yet even after this, corruption remained, thanks to the Black Soulstone. A darkness began to creep upon Heaven, unnoticed to all but Tyrael. A Corrupted Angel was even born from the Arch. However, with the aid of the Horadrim, the Black Soulstone was retrieved and the corruption lifted.[4]

With the Reaper assault on Sanctuary, the various factions of Heaven reacted differently.[35] However, Heaven was drawn into the conflict when the Reapers assaulted the Pandemonium Gate in order to prevent the Nephalem from pursuing Malthael into the Pandemonium Fortress.[11] Many angels were more disturbed at Malthael's betrayal itself (as he was the eldest member and former leader of the Angiris Council) than his genocidal actions against humanity on Sanctuary.[22]

The Nephalem defeated Malthael with the aid of Imperius.[11] Tyrael commented that the defeat of the Angel of Death had redeemed angelkind.[36] However, the Nephalem's bonding with the forces of death intensified angelic fears about their power and potential to turn to evil.[22]

In the meantime, angels continued to mend the damage Diablo's assault had rendered upon their home.[37] Because of Malthael's actions, and the numerous angels his Reapers had killed, Heaven shuttered its gates to the realms beyond.[38]

For most of the Diablo series, angels have not appeared as enemies. They are traditionally associated with the Mana orb in the user interface (D1, D3) or Life (D2).

In Diablo II, Izual marks the first instance of an angelic enemy, albeit corrupted.

The only non-corrupted, non-Reaper angels players can fight are Erelus, his minions, and Haziael, all driven mad by an eternity spent in Pandemonium.

Players encounter angelic warriors (as allies) in Act IV and Act V. In addition, the Skycutter sword summons an angelic assistance. They are armed with maces very similar to Skywarden.

Angelic Scouts (apparently mages) also exist: player only encounters them during The Great Weapon event. They are unarmed, but may channel beams of Light to expel demonic corruption and conjure shields of force through the sheer willpower.

Apart from angelic heroes, angel minions appear in Heroes of the Storm in its Heaven-themed maps, battling against demons.

Angel on a Mana orb (Diablo I)

An angel as depicted on a Life orb (Diablo II)

An angel on a Mana orb (Diablo III) 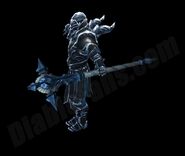 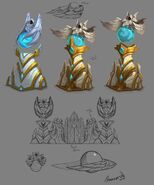 Angel towers (Heroes of the Storm)

Angel minions (Heroes of the Storm) 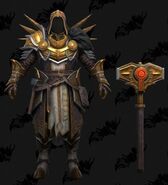 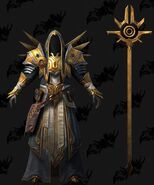