watch 02:34
Wiki Targeted (Games)
Do you like this video?
Play Sound

"I can't recall if these things were always here or if they were drawn by the island's emanations. They are vicious beyond compare, but I have found, through painful trial and error, that if their idols are not disturbed they will keep to the caves. Their particular evil must wait until I deduce a way to eradicate or control them."

Abyssals (a.k.a. Mermaids, also Naga) are fish-like female demon monsters encountered only in the Tidal Cave beneath the Greyhollow Island in Diablo III, in Adventure Mode, Act V. They can only be encountered underground. Based on the notes found, they worship strange idols and generally keep to themselves unless disturbed. All Abyssals seem to be female.

They are divided into two major subtypes: Protectors and Callers.

They are often accompanied by Flesh Harvesters and Amputators and seemingly can control them with their sorcery. Giant water serpents that deliver Amputators to surface are also likely conjured by Abyssals.

Abyssal Protectors behave much like Deceivers, except they cannot enter invisibility. Instead, they plainly attack in melee with their tridents. They are rather quick, but otherwise, average in the characteristics.

Abyssal Callers are pure casters, and although they do have a (very weak) melee attack, they will mostly attack from distance. When they notice a foe, they conjure a water elemental (resembling Hydra) at the location of their choice for 6-10 seconds.

The elemental is immobile and must be constantly supported by a Caller (who cannot perform any other actions while channelling, stopping the casting will destroy the elemental). Elementals attack in close combat for rather high damage, but can be avoided by simply moving away from them. In return, a summoned elemental cannot be damaged or harmed in any way, only disappearing if its time expires, or if the casting Caller is killed or disabled. 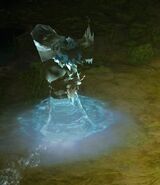 Presentation at BlizzCon 2015
Add a photo to this gallery
Retrieved from "https://diablo.fandom.com/wiki/Abyssal?oldid=183382"
Community content is available under CC-BY-SA unless otherwise noted.